The fact that multiple, perhaps even conflicting conceptualizations of complex systems are inevitable (see Intro “Complex Systems” | Valonqua) challenges a basic assumption of many complexity researchers [for example, Cilliers 2010; Mitleton-Kelly 2003; Sporns 2007]. Namely, the assumption that a(n) (open-ended) list of general complexity features is applicable to complex systems on different scales and across various scientific disciplines.

Problem 1 – The essentialist relationship between the abstract and its concrete manifestations
When we assume that an abstract complex system consisting of some key characteristics (such as  rich interactions, nonlinearity, unpredictability, etc) forms the basis of  discipline-specific realizations of complex systems, we follow an essentialist conceptual strategy.
Essentialist often refers to the (traditional) attempt to determine stable identities (that is, the truth, the real meaning, or the essence of something). But, it can refer to the relationship between the transcendental conditions of possiblity of something  (here: the features of an abstract complex system) and its empirical realizations (here: the concrete complex systems in the natural, technical, and social sciences), too.
Underlying the essentialist relationship between the transcendental and the empirical  is a deterministic view. This means that the transcendental conditions of possibility are able to determine all their empirical (concrete) realizations. Consequently, new concrete phenomena aren´t really new, but just controlled variations of what is already known by the transcendental determinations.
This means further that the concrete realizations don´t affect the transcendental conditions of possibility. In short: The transcendental affects the empirical, but not vice versa – at least in a traditional perspective.
Such essentialist conceptual strategies [for more details see, for instance, Bormann 2012, 2003c; Hofstadter 1985] aren´t plausible any more and have been widely criticized since the 1950s. Instead, alternate non-essentialist strategies have been proposed. Examples:

It argues that things which could be thought to be connected by one essential common feature may in fact be connected by a series of overlapping similarities, where no one feature is common to all. [Wikipedia 2016e]

This could mean in our context:
First, we have to deal with an open-ended series of complexity features which may be characteristic for some concrete complex systems, but not for others.
Second, we always compare concrete complex systems with each other, but not some abstract entity (the transcendental) with its concrete actualizations (the empirical phenomena).
Example: Instead of presupposing a proto-form (the essence) of character k, we only compare concrete variations of this character, as illustrated by the following figure from [Hofstadter 1985, 275]: 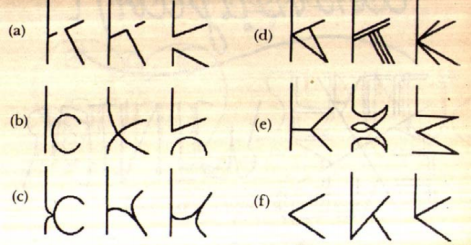 As you can see, these variations are similiar in some, but not in other regards. And there isn´t a single feature that is common to all variations of character k.

If one wants to check the fruitfulness of  generalizations, one must position the concepts used at the most general level of analysis, not as concepts describing possibilities but as concepts formulating problems. Thus general systems theory does not fix the essential features to be found in all systems. Instead, it is formulated in the language of problems and their solutions and at the same time makes clear that there can be different, functionally equivalent solutions for specific problems. Thus a functional abstraction is built into the abstraction of generic forms that guides comparison of different system types  [Luhmann 1995, 15, my emphasis]

This is the non-essentialist strategy I´d like to follow when discussing the open-ended list of (key) features of complex systems.
To be more precise: If we connect this equivalence functionalist schema with a difference-based way of asking questions (What-questions are replaced by how-questions, that is: how – by means of which differences – is feature XY constituted?) then the list of key features (previously seen as essential) is transformed into a list of difference- and problem-based questions (see next blog post).

Problem 2 – The narrowing of the solution space
This means in our context that a specific solution is overgeneralized or represented as the only solution. Examples:

With these two problems at the back of our minds, we can formulate a(n open-ended) list of (complexity-features related) questions that are based on two perspectives:

And this list of questions is the subject of the subsequent blog posts.

[Gasché 1986] Gasché, R. (1986), The Tain of the Mirror: Derrida and the Philosophy of Reflection, Cambridge, Mass. / London: Harvard University Press.

For Your Agile News and Tips